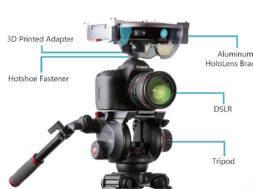 Virtual reality currently has many variations in capturing footage happening in the virtual world. But there aren’t too many options for the augmented reality technology such as the Hololens. To fix this solution, Microsoft released a series of videos in helping you capture the mixed reality footage for people to see what it’s like to experience mixed reality.

In this article we’ll go over how you setup the Microsoft Spectator View Rig so that you can record the mixed reality experience for your audience.

You’ll be requiring multiple components to setup this particular rig. And of course you’ll need the basics such as the Hololens, a PC, and a DSLR camera.

You’ll also be requiring some software in order to get this rig working.

After setting up your spectator view rig, you must calibrate in order to get the position and rotation offset of your camera to your HoloLens.

The compositor is a Unity extension that runs as a window in the Unity editor. To enable this, the Compositor Visual Studio solution first needs to be built.

The compositor runs as a window in the Unity Editor. The included sample project has everything set up to work with spectator view once the compositor DLLs are copied.

Spectator view requires the application to be run as a shared experience. This means that any application state changes that happen on the HoloLens need to be networked to update the app running in Unity too.

If starting from a new Unity project, you will need to do some setup first:

Microsoft also provided many use cases for this setup and rig which helps demonstrates the strengths of mixed reality.

This isn’t a cheap setup. The Hololens is currently meant for developers and creatives working in the mixed reality industry. Many companies like Microsoft are currently fascinated with AR technology for its components of immersive interaction between the digital and physical world. Tim Cook recently stated that there is a big future for augmented reality and hinted that the company is working on a solution of their own. These are the beginning stages to what the general population will adopt in the near future (meaning 5-10 years).