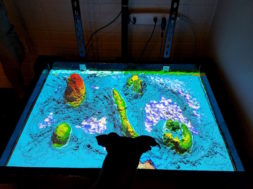 Everyday there seems to be something cool and awesome coming out for us to try. And today is no exception. Through the great minds at UC Davis, regular folks are now able to create a DIY augmented reality sandbox that forms a geographical topography (it’s cooler than it sounds). Sure, it might take a lot of time and labor but the outcome is wonderful. With the ability to manipulate the physical environment through digital applications, you’re able to interact with a colored topography of the environment with inside a sandbox.

The software and code was created by the team at UC Davis which is open-sourced to the public. In combination with the code, you use a projector to display the topography over the sand in the box. Then you use the Xbox Kinect sensors to track the continual elevation changes you make to the sand. The software runs in sync with the sandbox which allows you to view the change in elevation with a pallet of colors that mimic real topographical maps. So the further down you go in the box, the bluer it appears. The higher you go in elevation with the sand, the more red it gets.

And this AR application can be used for both education and enjoyment purposes. A reddit user by the name ‘Thomjazz‘ posted his DIY experience made for his son.

Throughout his walkthrough process you can see all of the different components required in creating the AR sandbox.

Here are the items required for this specific build:

Augmented reality technology is quite young and only on the cusp of what we’re capable of in the future. This DIY build demonstrates some strengths and benefits to where this technology can be applied. A majority of people always think to apply it only to gaming technology. But VR and AR can be used in so many ways beyond that realm. It can be used in education purposes to help grasp concepts and ideas. It can help identify problems in the medical field. It can be used for engineering and architecture. And the list goes on. Tim Cook even hinted that they’re building their own AR system, whether it be software or an OEM product. He believes that it’ll take a chunk of the technology market in the near future, bypassing our current technology era.

What’s more exciting is that the general public now has the ability to try creating their own AR applications without the assistance of a huge technology company. People have the ability to experiment with coding and add on to the current platform. Our capabilities can vastly improve through the trial and errors that people open source, like the good gentlemen over at UC Davis. We hope more people create an outlet for the curious minded to experiment on in order to drive our level in advancement for augmented reality technology.