Home VR Games How These 2 YouTubers Got Stuck In The Middle Of The Ocean In VR
VR Games
VR News
April 19, 2019 Griffin Streeter 0 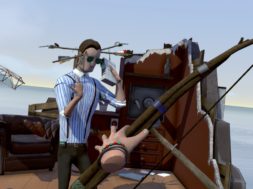 Let’s say that the world just flooded and you are trying to escape from your apartment building only using scraps and tools that’s available. And since the world is flooded you’ll have to escape from the rooftop of your apartment. Oh and across the street is your neighbor thinking the same thing. So you decide to team up with him to escape the floodlands. How would you do it?

Well, this is what YouTubers JoshDub and Mully decided to test out in VR through Sam & Dan: Floaty Flatmates. This VR game was developed by Pelican Party Studios and puts you in this odd suvival situation.

Players will start in the middle of the apocalyptic storm. You’ll have no items and will have to search for weapons and tools in order to build the bridge and make a new apocalypse buddy.

JoshDub shows us the complications in trying to build his bridge to link up with Mully who is across the body of water. If you make a mistake and fall, well you will most likely end up getting eaten by a shark. And this happens a few times to the duo as they are trying to plan their escape.

While the whole Earth flooding into water is a highly unlikely scenario, maybe this game can train you for this specific situation… if you are living in a big city.

You can grab Sam & Dan: Floaty Flatmates today on Steam for free. All you would have to pay for are the DLCs. The game is available for HTC Vive and Windows MR users.