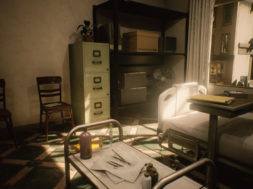 Can you believe it? Halloween 2019 is almost here and now seems like the perfect time to jump into some scary horror games in VR. Launching on October 31st is one that is suppose to be pretty spooky called “Survived” by Onion Studio.

The core of the game is described to be a shooter but it will rely on the setting and exploration components to really drive the VR game forward.

Survived takes place in the 90’s at a private hospital called Hopkins, outside the city of Connors. You’ll be playing as a medical staff who discovers a frightening situation when returning back to work from being sick. But upon returning to work you find that some horrible things have happened within Hopkins.

In the trailer you can see that you’ll have to explore much of the hospital while trying to kill off all the zombies. And now all zombies will be the slow walkers. There’s some freaky looking zombies in here that’ll jump and leap at you.

Survived will be available starting October 31st on Steam so make sure to check that out if you are into the scary VR games.

tags: scary vr game survived zombie vr game
previous Throw Your Hands Up For Party Pumper In VR
next Make Sure To Keep The 'Root Beer On Tap' In This Wild VR Game
Related Posts