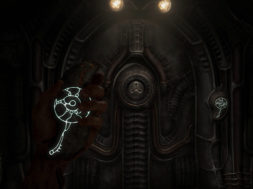 Ebb Software is currently in the helms working on sci-fi horror game called Scorn. For the past two years, their team has dedicated their time in creating this game and have gotten to the point where they need extra funding to finish the work. So they launched a kickstarter campaign hoping to get some additional funding and they have succeeded in reaching their goal of $175,000.

Currently as it stands, they have over $200,000 donated which means that they’ll be launching a VR experience to go along with the game.

If you watch the gameplay trailer, you can see just how beautiful (horrifying) the landscape is. It’s full of details and the graphics look AAA quality. Scorn is an atmospheric first-person adventure game that takes place in a nightmarish universe full of alien life-forms and grimly looking objects.

According to Ebb software, the game was designed around the idea of being “thrown into the world” and exploring with no idea in mind. Players will be isolated and lost inside this universe and will have to explore different interconnected regions in a nonlinear fashion.

Throughout Scorn, you will unlock new areas, acquire different skill sets, gain new weapons, and uncover new items. This is on top of you trying to comprehend the environment around you which will feel foreign. Ebb software wants you to create a broad gameplay experience that is more than a “simple blend” of all the game mechanics. Rather, they want you to re-think and adapt your actions to the unconditioned environment.

You will also notice that all regions are maze-like structures with various rooms and paths to discover. The world itself is living and breathing, inhabited by terrifying lifeforms. And with each action taken, there will be opposite reactions and consequences which will make you re-think situations.

An amazing quality about Scorn is that all the storytelling will happen in-game. There will be no cut-scenes to distract you from your objectives while playing the game. The game will also be unforgiving where it won’t lead you straight to important things in the game. Rather, you must explore and take your time.

Ebb Software has stated that with the successful funding, we can expect to see the game release some time in 2018 on Steam. There will be some digital add-ons with your pledge in funding.

Physical add-ons (REQUIRES TIER 4 AND ABOVE)

Scorn is shaping up to be a game that we should all expect something great from. While it is a smaller game studio, they have devoted a lot of time in trying to create quality content. We’ll be sure to check out the game in 2018.