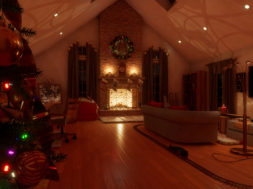 Now that Halloween is finally behind us, tis the season for joyous occasions. And there is no other iconic character that can best represent this season better than Santa Claus. So Mad Bee Studios has decided to release a joyous VR game called “Santa’s Visit.”

In this game you will become Santa Claus and explore about the cozy living area of a family’s home on the eve of Christmas. Players will have to look for clues and hints as to what each family member most enjoys and take your time choosing just the right gift for each – and while you’re at it, have yourself a merry little bit of playtime and personally test each of the available gifts.

You’ll have access to some cool gifts such as flying a Quad-Copter Drone or an RC Zeppelin, zip around with an RC Sports Car, read a heart-warming Christmas classic on an eReader Tablet, pop on some Holiday tunes with the portable Smart Speaker, and lots more.

You can also take the traditional route of lounging around and watching a vintage Christmas movie or two while Santa takes a much deserved milk & cookie break.

While Santa’s Visit might not be a crazy gun fighting adventure game, it delivers a cozy vibe that might bring joy to the holiday season. Santa’s Visit is available on the Oculus Rift for $9.99.