Here’s The Gameplay Footage Of Arizona Sunshine On Oculus Quest 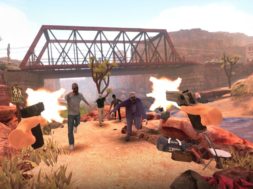 Here’s The Gameplay Footage Of Arizona Sunshine On Oculus Quest

As revealed a little while back, Arizona Sunshine will finally be making its way to the Oculus Quest. The famous zombie VR game features many unique aspects on the immersive platform and we also get to finally see what the gameplay footage will look like on the Quest VR headset.

In the gameplay above, you can see that the graphics has come way down from what we conventionally enjoy on the PC VR headsets such as the Oculus Rift or the HTC Vive. This is due to the limitations of the Quest and its GPU performance. The company had to sacrifice the quality of the graphics in order to bring it to the untethered Quest platform.

Vertigo Games has rebuilt Arizona Sunshine in its entirety for Oculus Quest and puts up to four players in the midst of the VR zombie apocalypse. You’ll once again be able to jump guns blazing into a southwestern America overrun by zombies anytime, anywhere.

Players will have to be ready with zombies coming at you from 360 degrees. Handle weapons with real-life movements, freely explore a post-apocalyptic world, and put your survival skills to the test in untethered VR – putting the undead back to rest is more thrilling than ever before.

Vertigo Games plans on releasing the revamped title starting on December 5th. This will mark the three year anniversary since the initial launch of the original game in VR.

The quest version is listed for $39.99 and you can pre-order today.