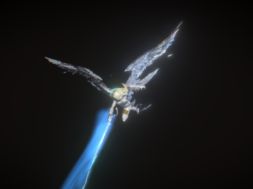 HTC Vive is home to one of the most used VR applications in the industry, Google Tilt Brush. With this application you’re given the ability to paint your imaginations in 3D VR. When people try Tilt Brush for the first time, they’re usually amazed by how you have a pallet the size of your room and are given free space to paint in the air. You are also given the option to change the scenery around you to space, the mountains, and etc.

While modern 3D VR painting is relatively new, many artists have adopted quite well to the new platform. In the video below you’ll see how a user by the name 3Dominus has created a masterpiece on Tilt Brush called “Angel vs Demon.”

Tilt Brush offers an assortment of paint  that not only display different colors but the density of glow and light as well. It’s quite amazing what these talented people can do in virtual reality.

Below are some of our recent favorites of 3D art in VR. You can actually see the angel portion of the artwork in 3D. Simply click play and scroll around to rotate the artwork. To zoom in and out use the mouse wheel.

The above image is of the Angel portion of the artwork from the video.

The above image of a Super Saiyan from The Dragon Ball Z saga.

The above image is Mercy from an FPS game called Overwatch. This was created on Google Tilt Brush.

The above image is Soul Of Cinder from a game called Dark Souls 3. It was creating using Tilt Brush.

The above image is Genji from an FPS game called Overwatch. This image was created using Tilt Brush.

3D VR art is fanning new flames for painters and artists to challenge themselves on a new medium. If you’ve yet to check out Google Tilt Brush, we highly recommend you do. You may also view the above artwork in VR using a mobile VR headset like