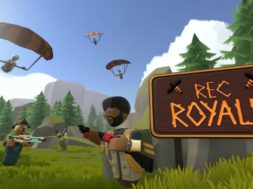 Rec Room has recently launched a Battle Royale mode on their VR platform. This game mode throws you into a remote area called Frontier Island with 15 other users where you must duke it out until you are the last remaining survivor. Similar in concept to PUBG or Fortnite, the game allows you to pick up weapons spread throughout the map while using the surrounding terrain to your advantage.

Rec Room Battle Royale also known as Rec Royale is currently available to the public under alpha release and Nathie was able to test out the alpha version of the game.

In the video you can see that you’ll be dropping down via a hang glider unarmed. You’ll have to scavenge around to pick up a weapon and use it with discretion. The characters are designed exactly the same way as they appear in Rec Room. You’ll also notice the circle that keeps you in bounds as time progresses in a match.

One of the cool perks about Rec Royale is the way you can access weapons. There is a holstering mechanic featured in the game where you can attach items on your hip for quick access. You’ll also be able to access the map with a backpack gesture. You simply reach over your shoulders to engage the virtual map.

You’ll notice that when you eliminate an enemy, there aren’t many expressions or body movements made by the party. They simply stand as a block and disappear once they are dead. You’ll also notice drops in frame rates as this is something that the devs need to fix.

Players will have the option of choosing between smooth locomotion and teleportation as well which will add a little bit of spice to the game.

Rec Room is a free VR application for Vive, Rift, and Windows Mixed Reality users so make sure to give it a download if you want to test out Rec Royale.