Home VR News Steven Spielberg: [Ready Player One] Wasn’t That Far Away From What I Think Is Going To Happen Some Day
VR News
January 22, 2018 SJ Kim 0 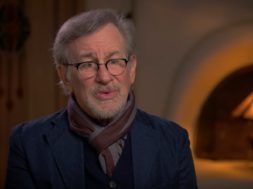 Who would’ve thought Ernest Cline and Steven Spielberg would work together in creating a Ready Player One Movie but here we are only a couple of months away from its worldwide cinematic release. To indulge us with fresh new content, Warner Bros. has released a brand new trailer featuring Ernest Cline and Steven Spielberg to provide their thoughts on the book and VR technology.

He also goes on to say, “virtual reality will be a super drug” if a scenario like the one featured in Ready Player One was to play out. People will be able to find escape in VR if the world succumbs to economic downturn.

For those unfamiliar with the book, the upcoming Ready Player One movie will be set in 2045, with the world on the brink of chaos and collapse. But people in the real world find escape in a virtual universe called the Oasis created by the brilliant and eccentric James Halliday.

When Halliday dies, he leaves his immense fortune to the first person to find a digital Easter egg he has hidden somewhere in the Oasis, sparking a contest that grips the entire world. When an unlikely young hero named Wade Watts (Tye Sheridan) decides to join the contest, he is hurled into a breakneck, reality-bending treasure hunt through a fantastical universe of mystery, discovery and danger.

The movie features many characters from your favorite video games and movies in the past. Here are some of the characters we found by watching this trailer.

In addition, you can visit a part of the Ready Player One world today thought Sansar called Ready Player One: Aech’s Garage in VR. The VR experience is free and here’s how you can access it today for free.

Ready Player One will be hitting the theaters on March 30, 2018 and we can’t wait.

tags: amblin entertainment ernest cline ready player one behind the scenes steven spielberg interview warner bros
previous Check Out How The VRChat Community Showed Signs Of Maturity When A User Had A Real Life Seizure
next Red Hydrogen AR Smartphone Shipping This Summer In 2018
Related Posts