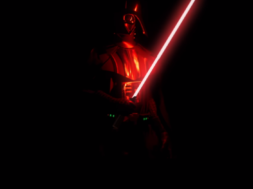 In additiona to the trailer, accliamed actress and comedian Maya Rudolph will star as ZOE3, a quick-witted droid co-pilot that audiences will partner with throughout the story.

In the trailer you will see the new droid along with of course, Darth Vader.

“Much in the way Alan Tudyk did with K-2SO, we needed somebody for this role that could create a unique character using their improvisation and performance skills,” said writer and executive producer David S. Goyer. “Maya truly was the first person we thought of, right from the very beginning, and her contributions and sense of humor have guided ZOE3 every step of the way.”

For those who are unfamiliar about the upcoming series, the new series takes place in between Revenge of the Sith and Rogue One. You will get to visit Vader’s lair on Mustafar. The canonical immersive adventure takes place between Star Wars – Episode III: Revenge of the Sith and Star Wars – Episode IV: A New Hope, and is set up by the events of Star Wars: Secrets of the Empire.

Vader Immortal: A Star Wars VR Series – Episode I will be apart of the launch title for Oculus Quest when it arrives some time this year.