Here is Awake: Episode One By Vive Studios And StartVR 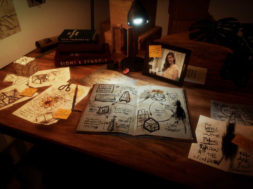 Here is Awake: Episode One By Vive Studios And StartVR

Vive Studios in partnership with StartVR has just launched a new VR experience called Awake: Episode One. This new experience is a character-driven interactive cinematic VR series that blurs the line between dream and reality, as you are drawn into the perplexities surrounding space, time and the human psyche in its most vulnerable state.

In Episode One, protagonist Harry, is a prisoner in his own house, obsessed with discovering the truth behind a recurring dream of his long-lost wife Rose and a strange pattern that contains a cryptic message.

Harry lives a life of process. His obsession is to dream often as way to relive a better past, unearthing the mysteries that haunt him and to correct a mistake that has cost him everything. But who is pulling the strings? An ominous voice on the phone warns Harry of his mistakes and propels him to act.

And now there is a new presence in Harry’s world. You. Your arrival signals a life-changing event that is capable of saving Harry from his darkness and unlocking the true potential of humanity’s future.

The new VR series features Actor Jake McDorman and actress Analeigh Tipton. You can download the new experience today on Viveport for $7.99.

tags: Analeigh Tipton awake episode one Jake McDorman startvr vive studios viveport
previous Mission Impossible Based Game Is Coming To VR
next The Spy Who Shrunk Me Set To Launch On December 18th With A VR Release In 2019
Related Posts