Help Get ‘Squishies’ Back Home 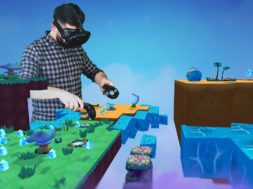 Help Get ‘Squishies’ Back Home

We all enjoy a little bit of fun and creativity and that’s exactly what Squishies brings to the table in VR.

Created by Brainseed Factory, Squishies is a puzzle focused VR platformer where you guide courageous and cute creatures through a series of increasingly hazardous, challenging mazes. Use unique motion controls, custom designed for VR, to push and pull the Squishies through their adventures in a colorful universe full of strange flora and fauna. Keep those little rascals safe while they climb, jump, fly and teleport-by-fish through 100 levels in five alien worlds.

A long time ago, aliens invaded the Squishy-verse after discovering that it harbours a huge number of crystals which can be used as energy sources. Now long gone, they have left the Squishies stranded all over the five worlds of their universe.

Fortunately the aliens also left behind one of their crystal collectors. This is where you come in – take control, operate the alien fish and save your friends by finally rolling them home.

The objective in the game is to push and pull the Squishies from one side of the maze to the other, all while earning medals, gathering crystals, climbing slopes, and avoiding pitfalls.

Squishies is available on the HTC Vive and Oculus Rift. The developers have stated that it is playable on the Valve Index but the controls are yet not mapped out for the controllers.