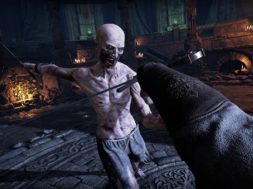 Deep Type Games has diligently been working on a new VR game called Hellspit: Arena. It is listed as a VR horror-slasher game with physically correct combat system and dynamic battles across arenas in the dark fantasy world.

The game will take you into the dark fantasy world of the late Middle Ages filled with the undead. Hellspit will provide a gruesome and realistic experience with stabbing, cutting and blunt blows, grabs, kicks, and movement tactics — the outcome of each fight depends only on your skill and endurance.

In the trailer you can see how you will need to strategize your movements to take on the enemy opponents. It can be 1 on 1 combats to facinge off against multiple enemies.

Hellspit: Arena is set to release on September 9, 2019. Make sure to check out the Steam page for the upcoming title.