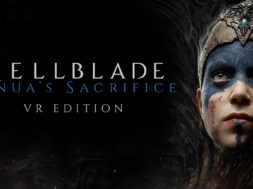 It’s been awhile since the hype has been real for a VR game. But we don’t need to wait much longer as Ninja Theory will be releasing the BAFTA award-winning title Hellblade: Senua’s Sacrifice in VR. The amazing story is now available on both Oculus Rift and HTC Vive through the Steam marketplace.

Something amazing about the game is that users who already own a copy will be receiving Hellblade: Senua’s Sacrifice VR Edition for free.

Inspired by Norse mythology and Celtic culture, Hellblade follows Senua, a Pict warrior who must make her way to Helheim by defeating otherworldly entities and facing their challenges, in order to rescue the soul of her dead lover from the goddess Hela.

In parallel, the game acts as a metaphor for the character’s struggle with psychosis, as Senua, who suffers from the condition but believes it to be a curse, is haunted by an entity known as the “Darkness”, voices in her head known as “Furies”, and memories from her past.

To properly represent psychosis, developers worked closely with neuroscientists, mental health specialists, and people suffering from the condition to add in more realism.

Hellblade: Senua’s Sacrifice VR Edition will be played in third person and won’t be available in first-person mode. The gameplay itself will last around 7 hours or so and you’ll be able to enjoy the entirety of the game in virtual reality.

Hellblade Senua’s Sacrifice VR Edition will be available for $29.99 on Steam for those who don’t own a copy of the game. But you can pick it up at a discount of $17.99 through Humble’s awesome sale. There will also be experimental modes available with fully customisable comfort options.

However, your PC must at a minimum have an Intel i5 3570K and an NVIDIA GTX 1080. For those that don’t meet those specs, it will be difficult to play the game.