HBO’s Silicon Valley Tries to ‘Break the Internet’ with VR 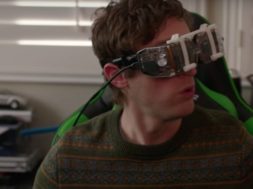 HBO’s Silicon Valley Tries to ‘Break the Internet’ with VR

Our favorite Silicon Valley “nerds” are back on HBO, April 23, and the trailer leads us to believe Season 4 is going to be all about VR.

The season’s main character, Richard Hendricks and his company Pied Piper, may have fallen on some hard (or more accurately, criminal) times last season, but he’s back in action and ready to go this spring. Hendricks’ latest project is creating a “new internet” which many believe will be based in VR and AR.

For those of you unfamiliar with the hit-series, HBO’s describes Silicon Valley as “a comedy series follows the misadventures of introverted computer programmer Richard and his brainy friends as they attempt to strike it rich in a high-tech gold rush. They live together in a Bay Area startup incubator loosely run by self-satisfied dot-com millionaire Erlich, who lets them stay in his house rent-free in exchange for a stake in the projects they invent there. But when Richard develops a powerful search algorithm at his day job, he finds himself caught in the middle of a bidding war between his boss — whose firm offers Richard an eight-figure buyout — and a deep-pocketed venture capitalist.”

Although Silicon Valley is a parody of life in the Bay Area’s tech monopoly, it is spot-on accurate more times than it is not, and mirrors a lot of what’s happening in the real world. Additionally, the human-centric story line makes it relatable to all, not just those who work in the tech industry.

We’re going to have to wait for Season 4 to come out to discover exactly how Richard plans to use VR and AR to save Pied Piper, but we’re excited to see HBO’s interpretation of our beloved virtual and augmented reality’s “real world application” in Silicon Valley.