HBO Bringing Westworld To VR In Partnership With Survios 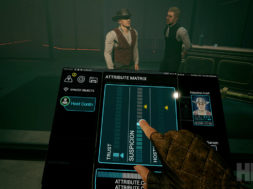 HBO Bringing Westworld To VR In Partnership With Survios

HBO has announced that they will be partnering with Survios to launch an immersive experience called Westworld Awakening. This will be a new VR game based around the hit TV show Westworld. The two companies are set to bring Westworld Awakening to more than 400 VR arcades worldwide.

Westworld Awakening will be set during the events of season 2. This will be a narrative-driven experience where you will have to embark on a stealth exploration across the lands. You will be taking the perspective of Kate who is a host within the Mesa facility that has suddently attained self-awareness and must undergo a journey of self-discovery to understand exactly what that means.

To survive a dangerous underworld where no one and nothing is what it seems, you must take matters into your own hands and, using a QA (Quality Assurance) tablet, manipulate the world around you.

In the gameplay trailer you can see that you’ll have free roam movement. In addition, the tablet will be providing a lot of cool features to solve the mysteries such as X-ray vision.

As you navigate Delos’ labyrinthine laboratories and offices, you will encounter iconic scenes and settings from the TV show​, solve puzzles and interact with (and manipulate) other hosts. But you can’t get too complacent: Hank, a relentless serial killer host who has stalked Westworld for generations, awakened alongside you and is now in constant pursuit, forcing you to react quickly even as you venture further into the unknown.

To escape, you must plunge into the secret past of Westworld and overcome an entire world designed to destroy and enslave you. If you are familiar with the TV show, you will have a much better time grasping the context of the original story.

“HBO is known for producing some of the most compelling shows, offering creative storylines and complex characters that keep our viewers coming back for more. Through VR experiences, we are bringing these fictional people and places to life for our viewers and letting them interact and engage with our shows in new, immersive ways,” said Aaron Nonis, VP of Interactive and Immersive Experiences at HBO. “‘Westworld Awakening’ is the perfect fusion of the right creators and story, the right IP, and the right platform that allows us to create the next-generation playground for our Westworld fans.”

Starting August 20th, Westworld Awakening will be available on Steam for $29.99. The game is available for Oculus Rift, HTC Vive, and Valve Index users in VR. The game will be available in English in the U.S., Mexico, Brazil, UK, Germany, France, Spain, Portugal, South Korea, and China (arcades only).

Season 3 of Westworld is set to launch some time in 2020.