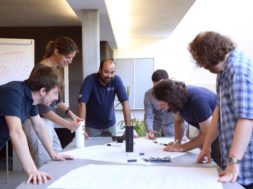 Augmented reality technology is traditionally used through devices such as AR headsets or smartphones with mounted cameras. But a company by the name of Space-Connect looks to break that mold with their smart AR sensor called Hayo. The company has created a peripheral that can record gestures and movements to switch on devices such as lights, TVs, and more. Hayo senses your unique context, passive motion, and proactive gestures that create unique controls for your home. Over a period of time, the device will learn your behaviors and use its patented AI technology to increase accuracy.

The interesting tidbit about their new device is how it captures your movements. Hayo first 3D scans your vicinity to have an accurate idea of where devices are set in a room.

Then, with the incorporation of the Hayo app you can create digital buttons above a physical object or even in the air to set commands.

The Hayo sensor will then recognize the digital button and follow the cues you have set for certain objects. There isn’t a set limit to how many digital buttons you can create. The sensor is perfectly parable with Chromecast, Hut, IFTTT, WEMO, Amazon Dash, LIFX, Nest, and Sonos.  You also only require one Hayo device per room.

“Most 3D spatial technologies scan a person’s gestures and motion,” Hayo states. “Hayo takes the opposite approach: it scans your physical space and objects, taking action when a person comes in contact with that space or object in unique ways.”

Hayo is currently an Indiegogo funded project. It has raised over $62,000 with the goal of reaching $80,000 with a month left. We imagine that it’ll reach that goal by the end of the week. You can currently reserve one of these devices for $219. The estimated shipping time is September 2017.

Space-Connect’s goal is to decrease your reliance on smartphones and leverage the use of AR technology to make it more “real.” You won’t have to rely on any handheld devices but rather uses gestures to make objects come to life. If you’re in the mood to invest in an Indiegogo project, Hayo might just be the one.