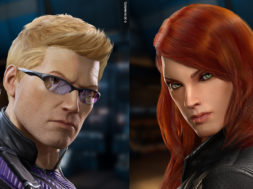 More good news! Oculus has announced that Hawkeye and Black Widow will be available in the upcoming game, Marvel Powers United VR. Over the past few days we heard about Black Panther, Venom, and Ultron. Now we get two more superheroes to look forward to.

Orphaned at a young age and protégé to a master archer, Clint Barton is one of the world’s greatest marksmen. His archery skills have be honed through rigorous training and commitment to never miss a shot, and his ability with a bow and arrow is equal to the superhuman powers of many of his teammates and foes. His Bow Shot and combination of specially tipped Trick Shots keep him even on the battlefield with his team and the enemies they face.

A specialist in espionage, Natasha Romanova finds her true calling as the Black Widow! Using her highly trained-and deadly-skill set to protect the world, Black Widow brings a decisively strategic element to the team with her Widows Bite gauntlets, elite marksmanship, and unmatched espionage excellence.

Yesterday, Oculus also shared news about the new maps available on the game: Wakanda and Sakaar City. We look forward to playing the game as its set to release on July 26th.