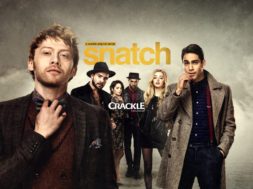 Sony announced yesterday that they are renewing Crackle’s most streamed show, “Snatch” for its second season, and will be releasing an exclusive virtual reality bonus experience on PlayStation VR. (Crackle is Sony’s free media streaming service. If you don’t know, now you know!)

“Snatch” stars Grint as the utterly posh, Charlie Cavendish-Scott. Grint also serves as an executive producer on the show. Called a “whole lot of fun…with an irreverent sense of humor,” by the Boston Globe, the show’s premise is about young, up and coming hustlers who stumble upon a truck load of stolen gold and suddenly find themselves sucked into the high-stakes world of organized crime. The boys must quickly learn to navigate the treacherous waters of London’s underworld as rogue cops, gypsy fighters, international mobsters and local villains descend.

Crackle’s Snatch VR will be released next month. The 6-minute interactive episode was co-produced by Future Lighthouse and transports viewers on an immersive experience into London’s high-stakes world of organized crime. The VR episode was shot during four days in Manchester, and each character was filmed on a different day using stereoscopic techniques.

The VR experience is based on one of the shows most popular episodes — You and the hustlers attempt to break into the safe of Sonny Castillo (Ed Westwick) and can choose to keep cracking the safe or leave the hideout before the cops and Castillo’s goons arrive on the scene.

“In VR the viewer has a lot of power and controls the outcome.  Our goal is to teleport you alongside Rupert Grint and his thieving friends to make you feel the adrenaline of the heist.  We want the viewers to have agency over where they want this caper to go,” said Nicolas Alcala, Future Lighthouse’s CEO and director of creativity.

The season renewal and VR component were announced yesterday, April 19, at Sony’s upfront presentation at Sony Square in NYC.