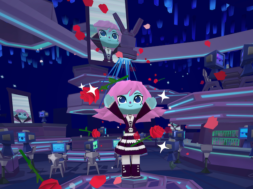 Ready to sing your heart out? Step up to the mic with SingSpace, launching today on the Oculus Store for Samsung Gear VR.

Designed by Harmonix, the studio behind the Rock Band franchise and Karaoke Revolution, SingSpace revamps karaoke by setting it in a cosmic, punky, bubblegum world that makes me long for the 90’s all over again. Created exclusively for VR, SingSpace amplifies everyone’s two favorite karaoke features: the thrill of performance and fun with friends.

According to Oculus, “There’s no need for a separate microphone—just put on your Gear VR headset and you’re ready to sing your heart out. If you grab the new Gear VR Controller, you can use it like a mic to add flair to your performance—

Think of it like the VR equivalent of singing into your hairbrush, only cooler.”

The game comes preloaded with a track list that I can’t help but feel was created just for me (or all you other 80’s babies out there — I mean — Baby One More time?! Someone quite literally will have to pry the mic from my hands). Check out the songs below. To keep the party going, users can also purchase a monthly subscription to access an expanding library of karaoke staples and modern hits. 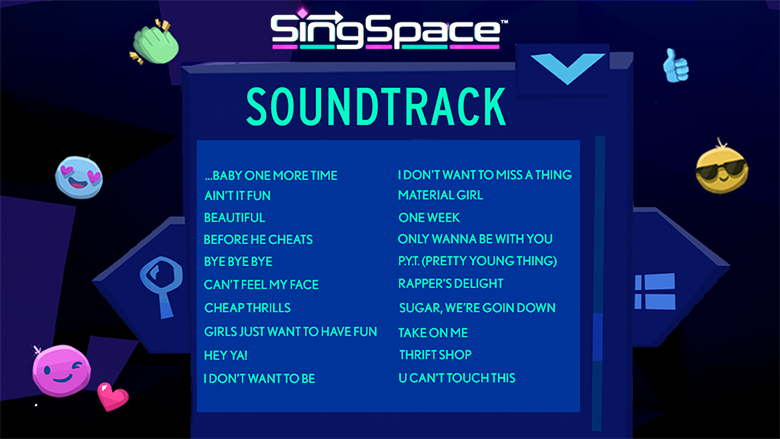 “Some people are great singers, but the rest of us have a place in karaoke, too, with our silly songs, going off-script, or just trying really hard,” says Harmonix Product Manager Jessa Brezinski. “We decided not to worry about whether you’re singing pitch-accurate and give you animations so you can really make the performance your own. A karaoke performance doesn’t have to be Grammy-worthy to be great.”

“In real karaoke, you perform live for people and they respond—cheering, singing along,” Brezinski explains. “That social connection is part of the reason you karaoke rather than just sing alone in the shower. We focused on making the game a great social experience. You’re hanging out with real people—from your couch!”

SingSpace lets you design your own avatar, offering a variety of hairstyles, clothing, facial features, and more. Interact with other avatars, encourage fellow singers through emoji, and get ready to let your inner Mariah Carey loose.