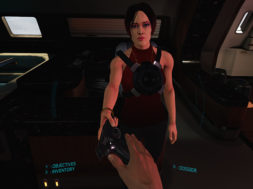 Ever wanted to know what it’s like to be a secret agent? Well look no further as Defector will be putting all your nerves to the test.

Defector is a new upcoming secret spy game where you have to complete various missions undercover. At E3 we got to go hands on with the game and it truly is striking. One of the coolest components about the game is that you get to make your own decisions during missions. You get to choose your actions which will provide different outcomes based on that scenario.

You will have to earn your suspect’s trust by looking for social cues and by what they say. You will have pick the right answers and actions to get the most out of the missions but it’s all based on your choice.

In the demo we got to play a mission where you have to collect intel on a dealer aboard a plane. Your partner is also there to help you but you will have to play the cards right. We went through a series of interactions before closing the deal. The dealer got up to check his bank account and we had 30 seconds to look around and collect info on him before we had to run back to our seat so he didn’t see us.

It didn’t take long for him to find out what we were up to. So we had to make the decision: kill him or let him live. After letting him live he killed the pilot and set off the alarm. We had to fight and shoot a wave of hostels before we drove a car off a plane onto another plane. Then we had to shoot down enemy fighter jets who were trying to take us down. Talk about an adrenaline rush. This portion in particular made us feel like we were Tom Cruise in a Mission: Impossible movie.

Not only did we have to shoot the enemies but we also had to know how to fist fight our way through. A big bodyguard was standing in our way and we had no gun. So we had to react quickly to block his fist and throw in quick jabs to the face to defeat our opponent.

The controls in the game are quite fluid which allowed us to stay immersed in the experience. The fist-fight mechanics are fun and can be creative. After getting a few hits in you can grab him by the chest and throw him into a wall or other objects around you.

Defector is one of those games you will have to keep your eyes on.