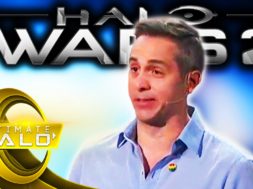 This week, 343 Industries (developer behind the last two Halo games) announced through a Halo Waypoint blog post that Studio Head of External Development Dan Ayoub would be leaving their studio, and moving to Microsoft’s mixed reality division.

In an except from the post, 343 Industries bid a heartfelt goodbye: “Today we’re sad to be saying bon voyage to one of our own, as Dan Ayoub – who’s worked on Halo games since Halo: Reach all the way back in 2009, bids us, and the gaming industry, a fond adieu,” the post reads. “Dan is set to begin a new adventure within Microsoft in Mixed Reality, where he’ll be pursuing one of his passions…the empowerment of education through technology.”

This was a big week for Microsoft’s mixed reality. In addition to gaining Ayoub, they launched pre-orders for the developer editions of their Windows 10 VR headsets and revealed a new pair of motion controllers. The developer kits ship in August, and consumer versions (and the controllers) will be available later on in 2017.

The Microsoft team has taken to social media, announcing Ayoub’s new position. It seems like a lot of exciting things are around the corner for Microsoft. Maybe we can expect some sort of Halo VR experience in the near future.