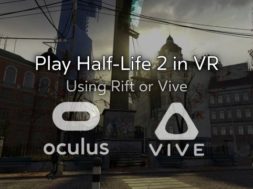 Half- Life 2: VR just got greenlit by the Steam Community. The 13-year-old game, commonly praised as one of the “greatest games in history,” has now been reborn for VR as a community mod project which will bring capability to the Oculus Rift and HTC Vive. The project has been in development since 2013. (Check out the Seam Greenlight page here!)

“The whole team offers their heartfelt thanks to the ~15,769 wonderful people who have voted for us at the time of writing!” the mod team wrote in an update. “The 95% yes rate and all the positive comments have given us many warm fuzzies over the last couple of days and kept us on the front page of the Steam community and the Half-Life 2 page.”

The teaser, highly responsible for the Greenlight, starts off by offering a glimpse of City 17,  the game’s memorable opening location. Trailer also features  the game’s iconic Gravity Gun being controlled with position-tracked devices like the HTC Vive wands or the Oculus Touch controllers. Check it out below:

Half-Life 2 was first introduced in 2004 by Valve and created for PC.  The VR version will have full motion input support, remastered visuals, a made-for-VR UI, realistic weapon interactions, and more.

It will be released entirely for free, though it does require a copy of Half-Life 2 and Episode 1 & 2 to work correctly. No dates have been announced for release yet, however Steam’s Greenlight page says that it should happen “soon”.