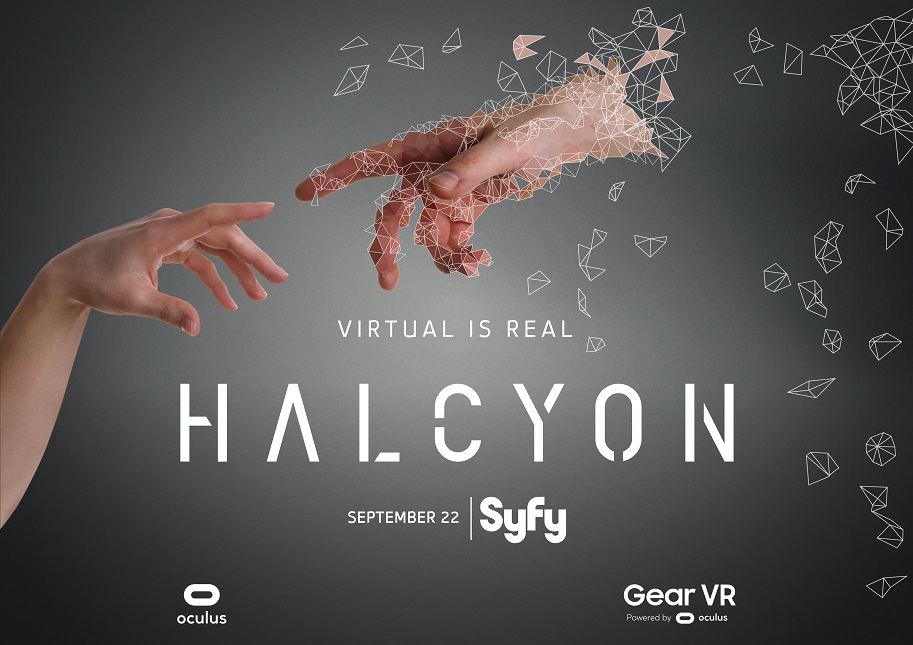 Recently, the good people over at AltspaceVR and NBCUniversal have teamed up to create the very first TV show called Halcyon, which will be debuting through Syfy Networks. NBCUniversal has recognized the power and popularity of the growing VR community and wanted to adapt a series behind the power of virtual reality.

Halcyon is a scripted show taking place in the year 2040. An emerging Titan and CEO by the name of Blake Creighton (acted by Michale Therriault) will be running a virtual reality company called Halcyon. He discovers that with some new emerging technology he can directly place people into the virtual reality world through neurological implants. This allows and manipulates the brain to cross over the threshold and into the virtual world without having to wear VR devices.

But Blake Creighton is soon found dead appearing to have been murdered. When police investigate the scene of the crime, there isn’t a trace of evidence that explains how he could’ve been killed in the real world. So the detective of the case, Jules Dover, goes on to investigate the virtual one to see if the first ever murder happened in virtual reality.

Jules Dover partners up with a character named Asha to investigate and uncover the dark spirings of the virtual world.

Secret Location is a digital content studio located in Los Angeles and Toronto that pushes the boundaries between technology and storytelling. The studio is led by James Milward, the Founder and Executive Producer, who created Secret Location in 2008. Currently, the studio employees over 60 individuals.

Secret Location was given the tall task of putting together the Halcyon series due to their notoriety and success. Secret Location has won multiple awards including 5 Emmys, one being the first Primetime Emmy for a virtual reality project called FOX and a Peabody in 2015. With expertise and artistry in the digital craft, they were the perfect fit for producing the series.

The studio has also teamed up with Benjamin Arfmann, an award winning director, to produce the Halcyon series. Benjamin has previously premiered his work at big festivals including SXSW and on TV networks such as the History Channel.

AtlspaceVR is a virtual reality platform where you and your friends can come together to socialize and partake in various activities. Some of the activities include frisby golf, card games, and even attending comedy events. Reggie Watts recently held a comedy event in AltspaceVR for the general public making it one of the first comedic acts in virtual reality. This social virtual space allows you to freely enjoy the imaginary world of VR. You partake in activities commonly found in the real world but the nice thing is that it can be done from the comfort of your home.

Users can tune in to AltspaceVR through HTC Vive, Oculus Rift, and Android devices which are the most popular mediums. There’s also a 2D version of AltspaceVR which can be accessed through a regular PC.

The AltspaceVR platform can also be leveraged for holding meetings and press conferences and that’s what the team did to kick off the announcement of Halcyon. The producers, actors, and team members were all in attendance in AltspaceVR to explain and answer questions about the new upcoming show. 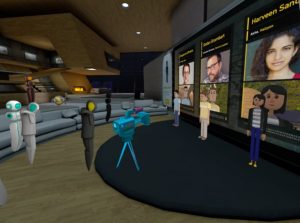 We had the privilege to talk with the team at AltspaceVR including Jane, Director of Business Development, and she filled us in about the lineage of AltspaceVR and what Halcyon is all about. What we learned is that AltspaceVR hails from a long road of research and development. They were first founded in 2013 in Redwood City, California. This was around the time where VR was first picking up steam with the Kickstarter announcement of the Oculus. AltspaceVR then went on to release a closed beta of its platform in 2014. With the feedback and knowledge the team went on to release the Beta to the public in 2015 by raising $15 million in capital through VCs.

AltspaceVR currently holds the record for having the largest VR gathering with over 1,200+ people in attendance.

Jane let us know how excited the team is for the launch and premier of Halcyon. This will be the first scripted TV show that phases in the regular use of VR headsets on AltspaceVR. NBCuniversal caught interest in VR technology due to the growing popularity. So they teamed up with AltspaceVR through the Syfy Channel to release this experimental show around the world.

The layout of the show

The show will be spread into 15 episodes, which 10 of them will be broadcasted through the linear channels and websites. The 5 remaining episodes will be exclusively available on the VR platform. Every episode will be 5 or so minutes in length with the series totaling about an hour. The audience will get the chance to watch the series in VR and also in conventional 2D. Unfortunately, the show won’t be available on the Syfy Channel in the US nor Canada due to licensing reasons.

However, Halcyon will make the debut on the 15th at 11AM PST inside the AltspaceVR platform. People will be gathering together in the virtual space to watch the premiere of the show including Benjamin Arfmann, the aforementioned director of Halcyon and Stefan Grambart, the creative director of Secret Location. Nothing quite like this has ever happened and we’re waiting in anticipation to see the turn of events.

The future of entertainment and media through VR

Halcyon will be a good measure for the future of the VR industry. It’ll give us a glimpse of the popularity and interaction of a show on the virtual reality platform. Companies such as NBC will be keeping a close tab on this new refined technology and measure if there’s any opportunities for them in the future. This is an interesting phase for VR technology as bigger players continue to join the frontier in moving the community forward. Halcyon will hopefully create a foothold for future content producers and studios to improve upon.

AltspaceVR and NBCUniversal have a tall task and we look forward to the 2 companies in fulfilling a void in virtual reality. Remember to RSVP for the premiere of Halcyon on September 15th, in AltspaceVR!