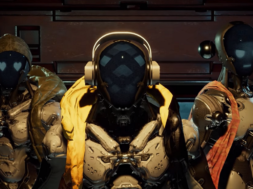 Gunheart by Drifter Entertainment is now available for Oculus Rift and HTC Vive as an early access game.

This multiplayer sci-fi shooter provides an interesting story and style of play we’ve yet to see in the VR world. You’ll be designated as one of the main characters who takes on waves of super-vilified insects with masculine proportions. Anyone in the game will be able to co-op with two other players in playing out the main story. This particular title will test you on positioning and strategies in eliminating the swarm of enemies.

Gunheart takes a unique approach where they’ll be offering both teleportation and locomotion movement in the game.

Gunheart will allow you to take advantageous spots to destroy your enemies and travel greater distances with less effort. Teleportation also offers you the movement of quickly getting up to vertical spaces. Drifter Entertainment didn’t want this to be easy either. Your enemies will quickly adapt to your movement on the battlefield so you must stay wary of your position or else you can quickly be separated from your allies.

Gunheart was built using Unreal Engine 4 by some talented individuals. On the Drifter Entetainment team is Ray Davis who served as the General Manager at Epic Games. He’s helped release titles such as Robo Recall for the Oculus Rift. Davis has also led the engineering efforts for Gears of War 1 and 2 with Microsoft. Another key member is Kenneth Scott who’s spent the last two years on the edge of VR creation at Oculus. Additionally, he’s worked on titles such as Quake 3, Doom 3, and the Halo franchise. The third key member of the team is Brian Murphy. He’s worked as the designer and creative director for Microsoft Studios and most recently worked on HoloTour for the HoloLens.

You’ll also notice in the game that you have access to a variety of weapons from crossbows to assault rifles to even lasered discs. The weapons available will be based on the armory formed by your party. There are also cool ways in summoning weapons. For instance, if you put your hands together in the virtual space, you’ll be able to summon a machine gun or some type of hybrid weapon (as long as your wielding weapons in your hands).

Something cool that you’ll also notice is when you enter the lobby, you’ll be greeted with a spacious lounge. Here, you’ll be provided with a luxury of entertainment such as balloons, drawing utensils, and even foam you can hit your friends with. While Gunheart isn’t yet ready to be tested by the public, Drifter Entertainment is doing a superb job in creating a unique game that’ll surely entice VR enthusiasts.

The FPS game is available today on SteamVR for 34.99.