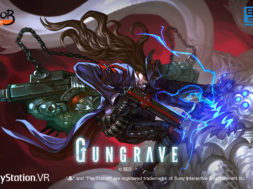 Gungrave is a popular anime series that first premiered back in September of 2003. The story follows the journey of two friends named Brandon Heat and Harry MacDowel who join a mafia syndicate to gain power in society. Throughout the series the two characters face new friendships, betrayal, love, and more that shapes them to be who they are today. Now, the popular anime series comes to PSVR with the announcement of the Gungrave VR game.

Being developed by Iggymob, you’ll be able to play the game as your favorite characters with many different weapons at your disposal. This includes machine guns, pistols, and a barrage of arsenals that you will use to defeat your enemies.

Gungrave VR has some unique elements in the game that make it stick out from other VR titles. For example, when you land a critical hit, you’ll see a comic book like text that says things like “GREAT” or “COOL.”

There isn’t much information available yet about Gungrave VR other than that it’ll be releasing on the PlayStation VR. It’s also possible that the game will be exclusive to Japan like many other VR games today. We hope that isn’t the case.

It is also stated that Gungrave VR will be making its way to the Oculus Rift and HTC Vive. Make sure to stay tuned for updates and other insightful news.