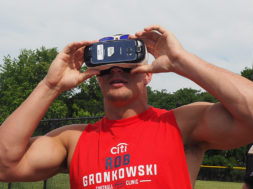 Jaunt VR is one of the leading providers when it comes to 360 VR cameras. Many studios today use their solution to record and render some of the most beautiful shots taken in the immersive space. Recently, they teamed up with Rob Gronkowski, tight-end for the New England Patriots, to join his youth football camp in the suburbs of Boston where there were more than 800 kids in attendance.

On day two of the camp, Jaunt VR was able to show Rob Gronkowski some of the footage they captured of him on day one. “He totally freaked out,” said the Jaunt VR team in an interview with HTC. “Not sure what his exposure was to 360/VR prior to our shoot, but it sure seemed like he’s a fan now.”

The Jaunt team also mentioned their close encounters with their ridiculously expensive camera being crushed during a ‘Gronk Spike.’ They used their Z Cam to capture some of the footage and it was actually the first time that their team used that rig.

Jaunt VR also went on to describe the benefits of seing 360 videos versus traditional 2D videos. “For a piece like this, it’s all about the experiential immersion you could never get with 2D footage. The ability to actually feel like you’re on the Gronk Bus, or at the door with him as he surprises our unsuspecting camper, is the distinguishing factor in my opinion. We love to give sports fans access to places (locker rooms, sidelines, etc) that would never be ordinarily available to them. In other words, the ticket they can’t buy.”

Rob Gronkowski, however, isn’t the first Patriot to be involved in a VR project. That coveted spot goes to Tom Brady. Currently, a company called STRIVR provides a VR solution for Tom Brady that helps him re-visit gameplay and practices in an immersive environment.

There were no indications as to whether the Gronk experience is available to view today. However, the Jaunt VR app is available to download today on most VR platforms including Daydream, PlayStation VR, Gear VR, Rift, and the Vive.