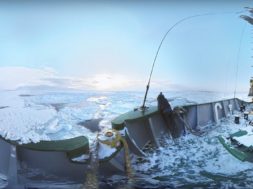 You may have noticed that Earth Day is a pretty big theme in VR this year. Between Boston’s first-ever Earth Day Eco Hackaton, Google’s ‘Brand New Google Earth’ launch party, and LA Zoo’s upcoming Beastly Ball which will be broadcasted in VR, it’s no surprise Greenpeace wants in on some VR action.

The app, entitled ‘Protect What You Love,’ was released at the very end of March for iOS and Android devices. Created by award-winning studio Alchemy and AllofUs for Greenpeace, the app currently features two stories that showcase the environmental impact mankind is having on the planet.

The first story is a 360 VR experience, Munduruku: The Fight To Defend The Heart Of The Amazon, follows the Munduruku tribe that lives along the Tapajos river. It tells the story of their struggles to protect their territory from government plans to build hydroelectric dams on their ancestral land. The experience transports viewers into the lush Amazonian jungle and follows the tribe’s plight juxtaposed with nature’s beauty. The second story is set in the icy Arctic circle, composed of content Greenpeace shot to raise awareness of climate change’s effects last year.

The unique component of Greenpeace’s project is that once users have finished watching a video, they are offered direction on how they can become involved. For example, the app provides links to allow viewers to sign petitions to help save the Amazon. Without being “preachy,” the app combines the humanizing VR emotional aspects with the informative solutions for how you can help, if you so choose. This is a prime example for how VR could be used in the future for charity work.

With VR’s market poised to skyrocket over the next few years, jumping from $13.9 billion in 2017 to an estimated $143.3 billion in 2020, it is a comforting feeling to know the industry is environmentally conscious. Hopefully this educational VR content will inspire change and help us protect this beautiful planet we call home.