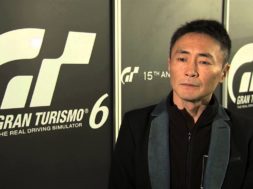 Gran Turismo is currently one of the longest living game franchises in the world having released the first iteration of the title back in 1997. In fact, the game spans over two decades now being available on the PlayStation platform. It is one of the most loyal brands to Sony and have released more than 10 games for the PlayStation platform. And this year During E3, Polyphony Digital showcased the latest upcoming version, Gran Turismo Sport which looks quite astonishing on the PS4 pro console but lacked the wow factor for the PSVR version.

GamesBeat had the chance to catch up with Gran Turismo creator Kazunori Yamauchi to talk about his thoughts on why the game lacks beauty on PSVR. When asked the question: “Are you happy with where PlayStation VR is for Gran Turismo today?” Yamauchi responded by saying “The first head-mounted display was created before I was born, around 1962. I’ve been waiting for more than 50 years. After all that time, I’d hoped it would be something more incredible than it is today.”

But Yamauchi understands that it takes time for technological advancements to happen. “We’ve done the best we can with what’s currently available. Once we get to dual 8Ks, it’ll be pretty nice. Dual 8K and about a 200Hz refresh rate. Maybe in another 50 years?”

Many people that have tested Gran Turismo on PSVR felt the dizziness and sickness after their play through of the game. When asked the question if he’s figured out a way to play the game without making drivers feel sick Yamauchi responded by saying, “If you’re driving carefully, staying on the track, driving as you’re intended to, you won’t get sick. As long as you keep the car under control, you’re fine. But if you run off the track or spin out, you’ll get sick. It’s the same as in a real car. You can’t avoid it. If you spin out a real car….”

What are your thoughts about driving games such as Gran Turismo on the VR platform?