Gorillaz Release A 360 Music Video For Their Song Saturnz Barz 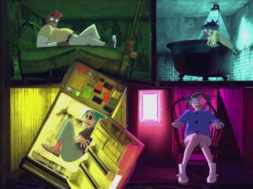 Gorillaz Release A 360 Music Video For Their Song Saturnz Barz

Gorillaz have been an infamous band for over a decade now with classic hits such as Feel Good Inc. and Clint Eastwood. Those were some of my favorite songs to jam out to during my high school days where it personally impacted my life. But for some reason, the band went on hiatus, leaving me with no new songs to enjoy from one of my favorite bands. But through some cosmic interventions the Gorillaz have been brought back into our lives.

In their new upcoming album called Humanz (releasing on April 28th), the Gorillaz have decided to release one of their songs called Saturnz Barz in an immersive 360 VR experience. You’ll start off on a train ride with a tablet in front of you. You’ll notice that the tablet happens to be playing the 2D version of the cartoonish music video (a signature creative of the band). But with a quick blink of the eye, you’re transported into an abandoned house with Stuart standing in front of you.

Soon after, the whole band will enter the house and go on to adventure the rooms independently. But the Gorillaz members start to realize that they aren’t alone in this abandoned house. Rather, they are greeted by some scary and frightening monsters.

Gorillaz have always done a fantastic job in entertaining the audience with unique visuals and storylines. Saturnz Barz is no exception. You’ll notice that the immersive 360 music video starts without the song to set us up for the story. As the song starts around the 3:00 mark of the video, you’ll be teleported into another world… essentially.

Gorillaz stick to their unique flare that we’ve grown to love over the past decade. It’s a welcoming site to see a band stick to their roots. Make sure to check out Saturnz Barz 360 music video through the YouTube VR app on Google Daydream or PlayStation VR.