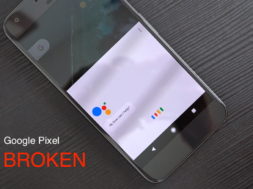 Google’s first official VR phones, the Pixel and Pixel XL are facing a lot of problems in their first generation releases. They recently had issues with shipping and packaging and are now hearing complaints about microphone malfunctions within the handset. Users of the Pixel VR phones took to forums and other websites to see if there were reports of this troubling matter and have discovered indeed, it was affecting a mass of users.

Brian Rakowski, VP of Product Management at Google, confirmed the microphone issue to be true and that it seems to be hardware-related. Rakowski stated, “We do believe this is a hardware issue. You are correct that software updates will not fix it (responding to a user). We are taking additional steps to qualify refurbished phones to make sure they don’t have this mic problem.”

But Rakowski and his team at Google are diligently working to sort out the issues. “It’s possible that some replacement phones were not properly qualified before we understood this issue, but that’s no longer the case,” Said Rakowski. “We have been taking additional steps to reinforce the connection at time of manufacture on phones built since January. Phones manufactured in the last month should not have this problem. For phones manufactured before then, the incidence of the problem is <<1%. I know this thread makes it seem much more prevalent, but there is a selection bias at work here.”

These types of circumstances are mostly inevitable as first generation handsets face similar problems. Kinks have to be worked out and fixed in due process of time. The same applies for Google, even though they are one of the largest tech companies in the world.

For those of you needing to get a replacement for the Google Pixel VR phones, Rakowski explained the procedure of doing so. “If you purchased the phone from Google, contact support and describe your problem as a mic failure and explain the symptoms. Our support reps should be trained on this issue and should help you process a return. Google will put a hold your credit card for the replacement and ship you the phone immediately. Once we receive the defective phone and verify the problem, the hold will be removed.”

For people who purchased the phones through retailers, you can simply go back to the store and get a replacement phone more quickly. Rakowski said that the reps are well informed on this matter and are ready to solve the issues of hardware replacement.