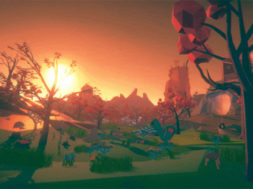 Google has excitedly announced the launch of Blocks, a new 3D modeling art app for VR. With 6 simple tools, Google imagines that people will be able to create models as simple as a mug and as complex as a spaceship on the HTC Vive and Oculus Rift.

You’ll be utilizing the Vive wand or Oculus Touch to shape, stroke, paint, modify, grab, and erase objects in the virtual world.

Google has been well-known in the VR community for providing the first 3D sketch app with Tilt-Brush. This powerful VR application is used by many around the world and ranks at the top of the list for best VR experiences today.

What differentiates these two applications is that Blocks essentially provides you with beginner shapes to start manipulating your content into a work of art. With this new application you can place and edit shapes without having to wave around your wand like some sort of magician.

When you first hop in to Blocks, you’ll be going through the basic tutorials that lasts around 2 minutes. It’ll teach you how to make cool objects like ice cream cones in 3D. But it won’t teach you everything so you must experiment around with this new application.

“3D objects are the building blocks of AR and VR experiences, but making them is hard!” said Jason Toff, Google Group Product Manager. “We built Blocks to make it easy for anyone—even people without any modeling experience—to make beautiful 3D objects.”

Toff also mentioned that Blocks provides speed for artists looking to get an idea out quickly into volumetric (virtual) reality. And for complete novices (like myself), we are able to create 3D models more naturally and easily by being able to create in 3D space instead of on 2D surfaces.

This is the first time that Google has released a VR application simultaneously onto the HTC Vive and Oculus Rift. Blocks is available on SteamVR and Oculus Store today for free so make sure to give it a go!