Google I/O 2017: You’ll Soon be able to Livestream 360 Videos From Your Living Room 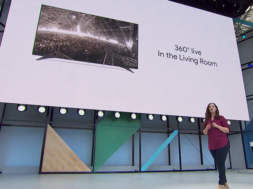 Google I/O 2017: You’ll Soon be able to Livestream 360 Videos From Your Living Room

During this year’s IO conference, Google will be announcing tons of exciting news and innovations. And to kickoff the heap of oncoming updates Sarah Ali, head of Living Room Products, YouTube, announced that 360 videos will be coming to a TV screen near you via Chromecast and YouTube.

During the presentation the team stated that YouTube viewership on conventional televisions is growing by 90% every year. And with such booming popularity the YouTube team will be bringing 360 videos straight to the living room via the assistant. “Another way people are enjoying video is through the YouTube app which is available on over half a billion smart TV’s game consoles, and streaming devices,” said Ali. “And today I’m super excited to announce that we’re taking the interactive experience a step further by introducing 360 video in the youtube app and on the biggest screen you own. And you know that you can watch 360 videos on the phone and Daydream VR headset but soon you’ll be able to feel like you’re in the middle of the action right from your couch and on the biggest screen you own.”

Ali states that this new feature will allow viewers to feel like they are in the heart of the moment and have access to an immersive experience on a traditional screen. You can scroll up, left, down, right through the use of the chromecast controller to see what’s all taking place. And on top of viewing rendered 360 videos, YouTube will also be streaming live 360 videos on the TV. “To enhance the experience even further, we’re also introducing live 360 in the living room, said Ali.  Soon, you’ll be able to witness moments and events as they unfold in a new truly immersive way.”

These new pushes by Google and YouTube are allowing a new way for content creators to interact with the audience and provide a more immersive way to watch 360 videos.