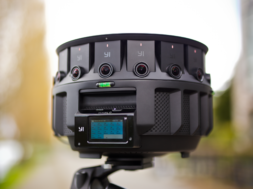 Everywhere we look, there’s a new 360 camera launch. We’ve covered Facebook’s Surround 360, Nokia’s OZO VR, and now we’re going to tell you about Google’s newest offer, the Yi Halo, which was announced today. What’s different about the Yi Halo is that it’s aimed more towards the average content creator and consumer, thanks to its lower price point.

Jake Mintz, Google VR product manager says, “the Jump program is really designed around enabling a large number of creators today. We’ve made very specific design choices to make this technology accessible and scalable to a wide number of people.”

Yi Halo was built in collaboration with Yi Technology, and Google has described it as the “next generation Jump camera.” The Halo shoots 4k video simultaneously on its 17 cameras, and uses Google’s Jump software stitch the footage together completely automated into a single, immersive 360-degree VR film. What’s more, is that the Halo’s 17th camera on the rig points straight up to capture a seamless stitch that includes the sky or ceiling. Yi Technology says the Halo is the only hardware using Google Jump to include an up-view camera unit.  Weighing in under 8 lbs, this camera is quite impressive.

With the goal of accessibility to the masses, Google has additionally launched a new program called Jump Start. This program aims to give over 100 filmmakers free access to a Jump camera during filming and unlimited use of the Jump Assembler over the next year. Those who cannot spend $17,000 on their own Halo, can send in an application to the program starting today. The deadline to apply is May 22nd.

“We want to reduce the complexity and cost in creating this kind of content,” said Jump Product Manager Emily Price. “By offering seamless stitching and saving the costly manual work of post-production, we can enable creators to think of the world in 360, rather than in slices.”

Yi Halo’s price and release dates are not yet available, but the new technology is being displayed this week during the NAB Show in Las Vegas.