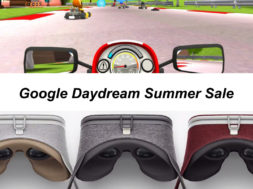 Google, like many of the other VR companies, is currently offering a special sale on select VR games called the Daydream Summer Sale. During this event, key VR titles will be receiving a huge discount of up to 60% off.

Below are the featured titles:

Lola and the Giant is the story of a girl called Lola who awakens in a strange and mysterious world. There she meets a lonely Giant and together they travel across a variety of creative and fun worlds all in a search for the way home.

This particular game will put you in a first and third person view where you must take on the role of two enchanting characters; a mysteriously powerful girl and a big strong stoney Giant. Users will be switching between the two unique characters seeing the game in different perspectives and worldviews.

Users will be tasked to solve light puzzles, encounter crazy creatures and experience a charming, fun filled romp through a visually stunning world, all in incredibly immersive VR.

Lola and the Giant also features a companion mode where you and a friend can embark on the fun filled adventure. All you have to do in order to get the companion mode going is have the friend download the Lola and the Giant Companion application from the Google Play Store on their compatible device and they can come along for the adventure. In companion mode they will be able to see everything you see and more. They will even be able to place down markers in your world, helping and guiding you along the way.

Along Together is a VR adventure game that allows you to take on a role of an imaginary friend who helps find the kid’s best friend. You’ll be playing as a guarding keeping the main character from the dangers that lurk around the corners.

Users will be using the Daydream controller to lift big objects such as trees and boulders to guide your kid across this world. You’ll also have to uncover secrets in order to rescue his best friend.

In Mekorama, you’ll be meeting an endearing little robot named B who’s known for his bumbling movements. Users will have to solve puzzling dioramas in order to get B home.

There are 50 levels inside the game with thousands of more available online. You can use Mekorama’s built-in QR code scanner to collect new levels made by other players.

In Claro, you’ll be playing through beautiful, zen-like miniature worlds where you manipulate the sun to grow a tree in each of the 38 puzzles. The worlds are quite detailed with beautiful scenery which makes the VR experience quite pleasant.

Along with the quality visuals are some soothing sounds that makes the immersive experience even more enjoyable.

Keep Talking & Nobody Explodes was one of the first games available on Daydream VR. In the experience, one player is trapped in a virtual room with a ticking time bomb they must defuse. The other players are the “Experts” who must give the instructions to defuse the bomb by deciphering the information found in the bomb defusal manual. But there’s a catch: the experts can’t see the bomb, so everyone will need to talk it out quickly.

Players will be challenged with puzzles that test the limits of your communication skills. Make sure to grab this classic if you’ve never tried it!

In Battle Planet, players will be all alone on a micro planet where deadly Terminoids come to attack you. It’s your duty to fight against these gigantic army of enemies. w

You’re all alone on a micro planet in space when the deadly TERMINOIDS attack you from all sides. Now it’s you against a gigantic army of enemies! All that stands between you and death is your gun power and a bomb defusal drone. Experience a stunning looking rogue-like VR shooter with nonstop action. Endless planets, massive boss-fights and ultimate firepower awaits you. Fight your way up the High-score ranks in this addictive One-Stick shooter and become a combat legend.

Wands is a first person VR experience that takes you on a mysterious journey in an alternate 1880’s London. You are a wielder of some sort where you’ll be equipped with a wand to cast a variety of spells against your enemies for fame, power, and glory in the fantastic realms of The Beyond. Players will be able to explore new spells and practice in a secret workshop in between battles.

Wands also offers fast paced magic duel battles against other opponents online. Progress and unlock new spells by winning battles and choose your own strategy to defeat your opponents. You can use the spectator feature to watch others battle in real time.

Toy Clash is a tower offense game that uses toys to prevent the attack of enemies break down their towers. Users will be able to upgrade their toys and use a variety of strategies to win the battles.

SculptrVR allows you build, explore, and share new worlds in virtual reality. You’ll be able to make mountains a thousand feet tall or build objects the size of a grain. This intuitive tool will let you color and shape every voxel as you make creations to match your imagination. This is a cross-platform appt hat’ll allow you to join friends in building these worlds.

The sale ends on August 17th so make sure to make your purchase while the discounts are live! Make sure to grab a Daydream headset if you are looking into a mobile VR headset option.