Recently, Activate has released a report regarding the trajectory and growth in eSports and it’s looking bright. Real bright. According to the source, by year 2020 revenue levels in eSports will be in the billions. 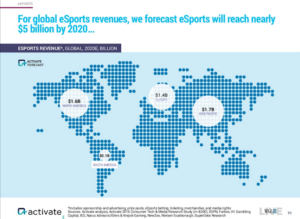 North America will reach around $1.6 Billion with Asia Pacific reaching around $1.7 Billion. All together the global revenue will amount to around $5 billion dollars by the year 2020. Those are the numbers we see in professional sports leagues such as basketball, hockey and etc.

What’s more astounding is that eSports will be reaching higher viewership than most of the sports leagues. According to the researched data, eSports will be viewed more than the MLB, NBA and the NHL here in the US with eSports finals reaching around 70 million + viewers. In the US, there’ll be 3 billion hours watched throughout an eSports season which is roughly 10% of all sports viewing. 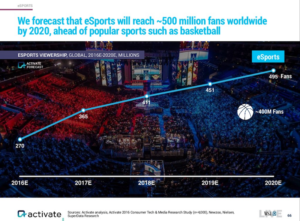 It’s also projected that the international fan base will reach around 500 million which is more than most sports leagues throughout the world. Games such as League of Legends have already put together international tournaments that end with the best teams competing against one another at the end of a season. Professional gamers such as Faker are growing into a household name with prize pools rapidly growing within the gaming leagues. 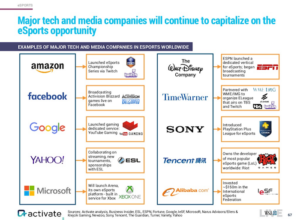 Major tech and media companies will continue to invest into eSports which will also boost the fanbase and viewership. Companies such as Amazon, Google, Facebook, Yahoo!, Microsoft, Disney, TimeWarner, Sony, Tencent and Alibaba have invested into the eSports sector. These are some of the leading technology companies throughout the world which has recognized the value in investing into eSports.

With these driving factors we’ll continue to see growth in VR. This new technology will be a force in the future for eSports as it provides a hybrid form of gaming. Unlike traditional video games, VR will require coordination. FPS games in VR requires you to aim a controller instead of moving the mouse or joystick. You’ll have to familiarize yourself on how to aim in VR and the ways you move around in the virtual world. In a sense, this will require more athleticism versus the traditional gaming method which can be a popular factor in eSports.

But while other methods such as PC gaming and console gaming have matured, VR is only on the cusp of its potential. The technology in the VR industry has yet to reach a state where we can center around one headset or form. Many companies envision different goals for the industry so there’s not an aligned agreement on where the leading tech companies want to take it.

Also, there’s not even a hint to a VR game the community can form around. For PC, you have games such as World of Warcraft, League of Legends, Counter-Strike Global Offensive and DOTA. For console gaming you have Halo, Call of Duty, Battlefield and other various classic games. But hopefully by the year 2020, we’ll see an emergence of a great game with a solid platform for VR. While there’s a long way to go, we can almost see the growth of VR eSports just over the horizon.