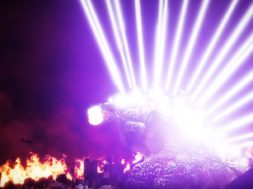 Godzilla seems to be the recent craze as the famous monster has taken over media. During this year’s San Diego Comic-Con (SDCC), we got to see the new trailer to Godzilla: King of the Monsters. We also recently got the release of the animated Godzilla movie on Netflix. Now, Godzilla seems to be coming to VR.

In the trailer above, you can see the famous mutant monster terrorizing the streets as you fly around in a flying vehicle. You will be getting up close and personal to contain the situation.

In rough translation they state, “By going through the city that was destroyed indefinitely by Godzilla, While cooperating with fellows, you can experience the fear of Godzilla’s overwhelming destructive power with VR!”

Godzilla VR seems to be a co-op game that you will be able to play with your friends. And again, this unique VR experience will be available at Bandai Namco VR Zone located in Shinjuku, Japan. The game will be played on the HTC Vive and will be an exclusive title to that VR arcade.

Godzilla VR is slated to release some time int he fall of this year. Godzilla is one of the most menacing monsters that has been created and it will be up to you to defeat it.