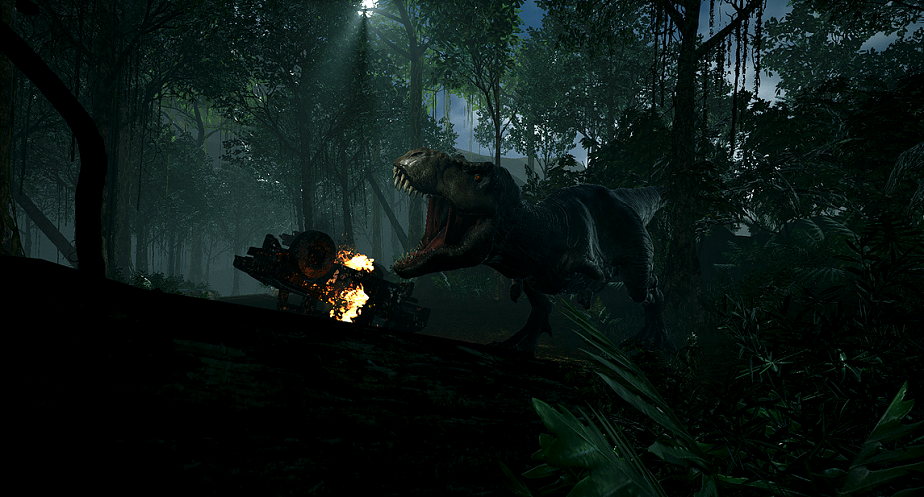 There’s been a lot of games that portrayed the dinosaur hunting experience but nothing comes close to the one that Island 359 brings. Created by CloudGate Studios, this VR game allows you to hunt dinosaurs in a virtual setting. You are dropped off on a secluded island (similar to the one in Jurassic Park) where you fend yourself from the dangerous and hungry dinosaurs. You are given a plethora of choices in weapons and must keep them from ripping you into a million pieces.

You are given the freedom to roam among the land and explore the dangerous jungle. You’ll have a base camp with weapons and artillery. You’ll also be surrounded by land and air vehicles. Your movement will be controlled by pointing at the area that you’d like to travel to with the Vive controller. The game will give you options to personalize movement which is phenomenal. 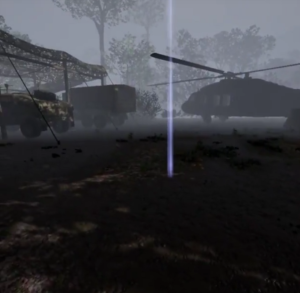 You’re also granted missions to take on in Island 359. You can take on bounty missions that pay by the dinosaur or by hunting down certain types of dinosaurs. The game gets creative and allows you to experience something that seems more realistic than traditional console games would provide. 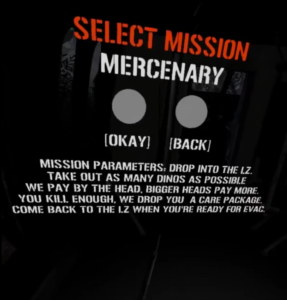 The sounds in Island 359 also brings on an awry feeling where you truly do feel as if you’re in middle of a jungle surrounded by strange creatures. Another thing you’ll notice is that dinosaurs don’t just come rushing towards you. They’ll roam around and come attack you if they notice you. But when they do come charging at you, it’s quite frightening. You must be alert and prepared to take down the dinosaur. 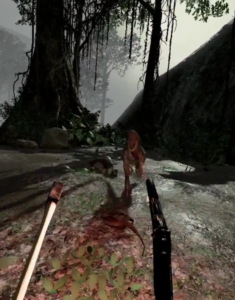 In this VR dinosaur hunting game, you’ll have the ability to double wield weapons. Whether it’s holding dual pistols or holding an axe and a gun, you’ll have the choice to mix and match to best defend yourself. You can also throw explosives and have them detonate by either pulling the trigger or rigging it in a certain place.

The weapons will come natural as the Vive controllers are all captured with motion sensors. So when you swing your hand with the axe wielded, you’ll notice the flawless follow through with the swing. The gun is motioned the same way besides pulling the trigger with the bottom button.

As you explore throughout the game you’ll run into many types of dinosaurs. But of course you must at some point come face to face with the one and only T-Rex. Yeah, that’s right folks, you must take down a T-Rex. Once you run into this dinosaur it’ll get your heart racing and you’ll be wanting to sprint for your life.

The game does a magnificent job in making you feel like your truly immersed into this world. Island 359 is a great action game and you can download it today through the Steam Store. It’s currently available for the HTC Vive. Have fun and happy hunting. We hope you get a chance to come face to face with T-Rex!