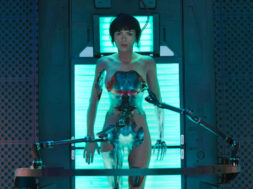 This Friday, March 31, the highly anticipated Ghost In The Shell VR experience will be released. A collaboration between Oculus Studios, REWIND, Dreamworks, HERE BE DRAGONS and Paramount, the new 360 VR experience is expected to thrill.

Although not much has been disclosed, a new trailer was released to build excitement.

GHOST IN THE SHELL l 360 Teaser I Paramount Pictures UK

“This is Major. I'm going in.” Step inside the immersive 360 Teaser for Ghost In The Shell.

Ghost In The Shell VR will be released in conjunction with Paramount Picture’s Ghost In The Shell film, which also comes out this Friday. Both the movie and VR experience are based on the popular 1989 sci-fi anime/manga that has had many incarnations over the past two-plus decades.

2017’s film version stars Scarlett Johannson, who plays Major, the first of her kind, cyber-enhanced human engineered to defeat the world’s most dangerous criminals. While Johannson’s flesh-colored superhero body suit might draw the crowds in, it seems critics are less than thrilled with the film’s adaptation.

According to The Hollywood Reporter‘s Jordan Mintzer, Ghost In The Shell is “a heavily computer-generated enterprise with more body than brains, more visuals than ideas, as if the original movie’s hard drive had been wiped clean of all that was dark, poetic and mystifying.” Another bone of contention circulating the film is Hollywood’s whitewashing of the character’s; many people are perturbed of Johannson’s portrayal of Major, who was originally Japanese. Despite this controversy, Mintzer suggests that “the real issue in Ghost in the Shell may have less to do with whitewashing than with brainwashing, as it often feels like the screenwriters (Jamie Moss, William Wheeler and Ehren Kruger) chose to jettison the more thought-provoking, cryptic aspects of their source material in favor of a streamlined actioner that jumps from one fight to another without much contemplation.”

Although the movie may not be everything critics had hoped it would be, fans are still invested in the VR experience. We’re excited to see what Ghost In The Shell VR has in store. Stay tuned for more details once it launches on Friday!