Getting Into VR eSports Early 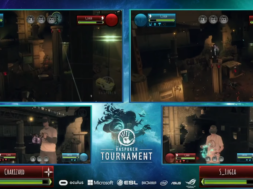 Getting Into VR eSports Early

eSports is one of the fastest growing industries around the world where it’s projected to become larger in revenue than the MLB, NBA, and the NHL. What’s even more crazy is that it’s projected to overcome these associations within the next 3 to 5 years which is quite astounding when you consider how young the sport is. Even the franchise owners of these professional sports associations have bought their very own eSports teams. Just look at the Philadelphia 76ers.

“The eSports industry is primed for incredible growth and we are thrilled to become an owner of such a storied franchise as Team Dignitas. There is a tremendous opportunity to leverage the infrastructure, resources and experience of the Sixers organization to support these exciting teams as they continue to compete at the highest levels across multiple games. We see our entrance into eSports as a natural extension of our expanding interests in traditional sports and entertainment and are confident that our involvement will accelerate the already rapid pace of growth in eSports as a whole,” said Philadelphia 76ers Managing General Partner Josh Harris.

Other teams who have invested or purchased an eSports team includes: the Miami Heat, Sacramento Kings, Memphis Grizzlies, Washington Wizards, Golden State Warriors, and even Magic Johnson himself who’s known to be business savvy. And while eSports is on the rise, so too is the VR industry.

Currently, every major tech company has invested heavily into the technology. Leading the charge are companies such as Facebook with Oculus, HTC with the Vive, Google with the Daydream, Sony with PlayStation VR, and Samsung with Gear VR.

Most of the listed companies have invested hundreds of millions of dollars into the new emerging technology and are creating ripples in the industry. And while the technology is currently in its infancy, the big players are trying to create waves by rapidly getting it in front of the consumers. And one way of doing that is by entering the eSports world.

Recently, Oculus in partnership with Intel and ESL have announced that they’ll be launching the first international VR eSports tournament called the ‘VR Challenger League.’

This new VR eSports competition will feature VR titles that will test gamers in a whole new way. The tournament will feature “The Unspoken” from Insomniac Games and “Echo Arena” from Ready at Dawn Studios.

Echo Arena is currently one of the best VR games we’ve ever tested that can quickly draw a big audience and user base. 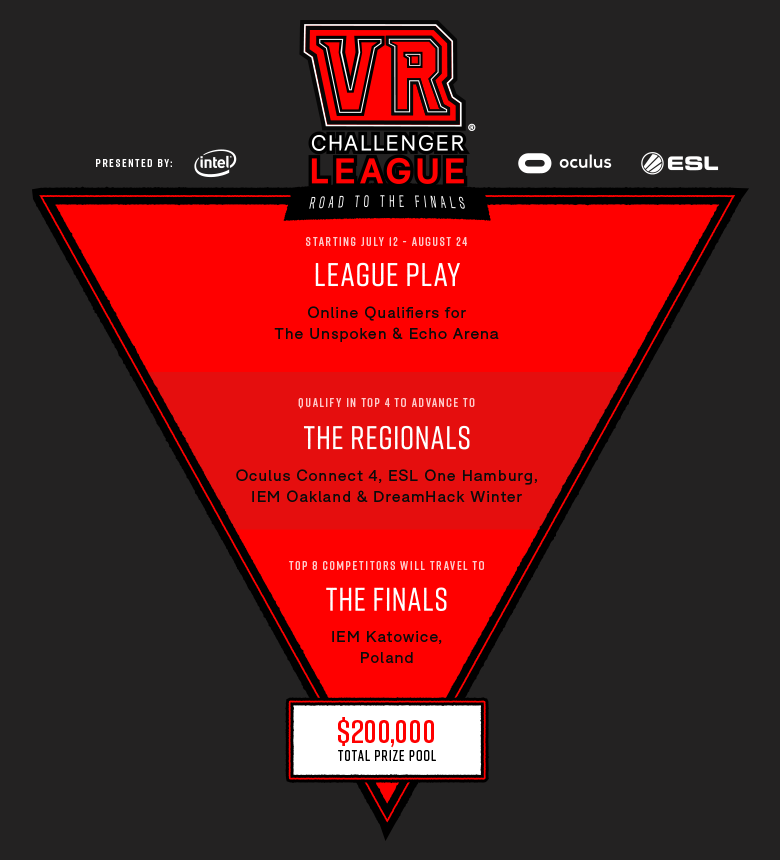 Intel, Oculus, and ESL will be offering more than $200,000 in cash and prizes during the length of VR Challenger League. The brackets will lead from a series of online qualifiers that feed into regional finals at:

What everyone needs to realize is the opportunity at hand. Currently, the VR platform isn’t a widely adopted technology. This means that the competition and talent pool are low compared to any other conventional eSports games out there.

You also have the ability to set standards in the emerging industry and have the opportunity to quickly gain recognition as long as you put in the work. These giant tech companies really want to push the industry forward and will help a handful of eSports gamers get there with them.

As stated earlier, eSports is quickly on the rise and VR will play a major role moving forward. While there isn’t much VR content available for competitive gaming, this is just the start. Getting your foot in early will definitely lead to greater opportunities moving forward.

VR also poses a new challenge for eSports gamers as you have to use more than a keyboard and monitor. You’ll be entering the virtual world where you have to coordinate your body and challenge your stamina, similar to the story fabled in Ready Player One.

While there’s many great opportunities in the eSports world, VR eSports looks to shine above it all. There’s great support behind the technology by the leading tech companies, organizations, and the VR community.

If you’ve been waiting to get competitive with gaming, VR eSports just may be the perfect fit for you. Make sure to try out Echo Arena and The Unspoken on the Oculus Rift. You can get more information about the VR tournament here.