Get Your Magical Hoop Game On ‘Hooplord’ 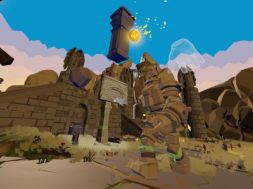 Get Your Magical Hoop Game On ‘Hooplord’

You know when you get the feeling that you want fight some bad guys in a video game but also want to drain some shots on them? Well, Hooplord VR has got you covered with their brand new VR title, Hooplord.

Yes, you heard that correctly. You will be playing some ball on top of battling enemies that are pretty gigantic.

Hooplord is a labor of love that combines boss battles and basketball into a hybrid VR experience that’s unlike anything you’ve ever seen or played before.

Inside of an enchanted forest, you find yourself on an ancient basketball court in the midst of a forbidden ruin.

The Basketball Gods look down on you, a mere Hooplord, and extend their sacred challenge:

Face the Elemental Centers in a series of fatal one-on-one duels: a clash between their impregnable defenses versus your godlike offense.

Glory awaits should you defeat all three guardians, and manage to evade death in the process.

You can pick up a copy of Hooplord on Steam for the Valve Index, HTC Vive, and Oculus Rift.