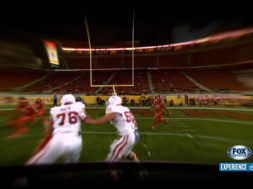 Every year, the Super Bowl garners attention of millions of fans across the U.S. Fox and Intel have teamed up this year to broadcast something special for the fans during Super Bowl 51 called “Be the player.” In this new form of technology, you’ll be given a 3D perspective of what a football player will be seeing during Super Bowl LI on February 5th in Houston at NRG Stadium.

For those technical NFL fans, you’ll be able to see how and why a certain player made a decision. The new 3D perspective will most likely demonstrate why a quarterback took that certain action.

“From the beginning, seeing and breaking down the play from the player’s point of view is the undiscovered country of sports broadcasting,” said Michael Davies, Fox Sports senior VP of field and technical operations. “This broadcast enhancement is like no other — it literally brings the audience down to the viewpoint of the player at the critical decision-making moment.”

Fox stated that they might show up to as many as 20 “Be the player” moments throughout the game. It’ll be determined by how many critical moments arise during Super Bowl LI. This will be the first year that this technology is being used during a Super Bowl game. In the above ad, Intel demonstrates how this technology will be used starring Tom Brady as the test subject. This is a ground breaking mile stone on 360 video technology.