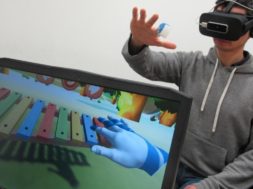 While the “rumble” feature was great in Call of Duty and other first person shooter games, rumbling vibrations don’t cut it in the VR world. VR and AR focuses on many experiences where you aren’t shooting, but instead, you’re grabbing, touching, and manipulating objects which wouldn’t vibrate in real life, making it difficult to use rumble to convey meaningful, direct feedback.

Enter, Go Touch VR, demoed this week at SVVR (Silicon Valley Virtual Reality Convention) in San Jose, CA. According to the company, “VR Touch is a revolutionary haptic wearable device for augmented and virtual reality systems. The device creates a real contact under the user’s fingers matching the virtual contact experienced in virtual reality. The coupling of virtual, experienced with the sight, and real contact, experienced with VR Touch, generates not just a feeling, but the illusion of touching a real object providing the user for a unique haptic experience never seen before in VR/AR.”

VR Touch is fully wireless, and has the size of a ring. It’s scalable concept involving one, two, or even ten fingers, each equipped with a device, allows the proper user experience for any kind of applications such as: gaming, 3D design, music playing, virtual desktop, and 3D pointing.

As seen in their video above, Go Touch VR makes it easier and more effective for users to work tacitly in VR and AR. Oftentimes, users have to adapt to software where’s there a disconnect between tracking and unnatural interaction strategies. With this new technology, the tactile sensation makes for a more natural tracking, which in turn leads to greater accuracy. VR Touch gives the illusion of objects pushing back against your fingers directly.

Go Touch VR is an interaction design company founded by leading expert in the field of haptics and human machine interaction. The main goal of Go Touch VR is pioneering tactile solutions for the VR/AR systems. Our ambition is to improve the user experience by introducing innovative and high quality haptic rendering devices for the hand interaction in selected industries. Go Touch VR pursues its aim through continuous and innovative research. VR Touch is ready to work with Oculus, HTC Vive, OSVR and Google Daydream and it is compatible with: Leap Motion, Intel Real Sense, Unity, Unreal Engine, and CryEngine.