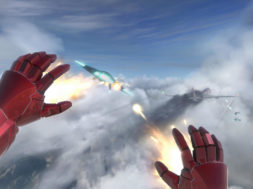 It has recently be revealed that Sony is working with Marvel in releasing a new VR title called Iron Man VR where they will be bringing Tony Stark up and center in the virtual world.

And finally, the studio has delivered the first trailer for us to take a look at.

In Marvel’s Iron Man VR the player, who plays as the genius inventor Tony Stark, confronts ghosts from his past—powerful forces who seek to ruin him and everything he stands for. By fully embracing the magic of PlayStation VR, players will come face-to-face with iconic allies and Super Villains as they jet around the globe on a heroic mission to save not only Stark Industries, but the world itself.

Around the 0:54 mark you’ll actually see some game footage which shows a plane on fire in the sky. You’ll have access to an array of arsenal which includes a repulsor and unibeam to take down any opponent in the sky.

The key reason it feels so good and natural to fly as Iron Man in our game is because we obey Newton’s laws of motion. We doubled down on how it would work in real life, which, it turns out, your brain really appreciates. Every frame we process includes calculations of up to a dozen forces, such as thrust, drag, and gravity — as well as our assistance systems — that output Iron Man’s accurate and believable trajectory through the sky.

Whenever possible, we preserve the player’s forward momentum. These systems allow the player to carve turns at high speed and enable our dogfight mechanics.

Inspired by those balloon-like “bumpers” at bowling alleys, we built an invisible system that cushions and guides the player around hard edges of buildings and other geometry. The bumpers also soften the blow when the player rams into something at high speeds. Under the hood, we account for potential upcoming collisions and gently apply collision-avoidance forces.

It turns out, the player doesn’t want to accelerate from zero to 300 kilometers per hour when they are trying to delicately fly around more confined spaces. Wherever more precise flight speed is needed, we apply different suit settings based on context. This allows the player to utilize their thrusters for both small-scale maneuvers as well as unlocking full-blown, face-melting thrust when they need it.

You can see some of the mechanics demonstrated in this video as Camouflaj Director Ryan Payton explains, “During the initial ideation process, the team at Camouflaj knew we had to execute on a number of essential components to bring the Iron Man fantasy to life in VR. Feeling like you’re wearing the suit, blasting your Repulsors, viewing the world through a full three-dimensional HUD, and being the complex (and inventive) Tony Stark character were all key, but none more important than nailing the sensation that you’re flying around as Iron Man in VR.”

There is currently no solid release date other than it being released some time in 2019. It will be a PlayStation exclusive for the time being and we do not know yet how long of an experience it will be.

This will be a fun treat for Marvel fans who get to experience what it might be like to be Tony Stark in one of his Iron Man suits.