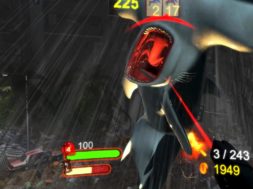 Developed by Autum VR, Sharknado VR: Eye of the Storm will be coming to the HTC Vive, Oculus Rift, and PlayStation VR later this year.

Sharknado VR: Eye of the Storm

In Sharknado VR: Eye of the Storm you will be stranded in the eye of a tornado. And to be specific, it isn’t a regular tornado. Rather, it is a tornado filled with the deadliest sharks in the world.  Using weapons ranging from a chainsaw to shotgun to a machine gun and everything in between, you must try and survive the onslaught of sharks.

Oh, and you have to save as many people as you can all while dodging Barracudas, Octopuses and poisonous Jellyfish too.

In the trailer you can see the arsenal of weapons at your disposal. You will use your controllers to swing around the chainsaw, shoot your shotgun, and even launch a rocket out of the rocket launcher. The game looks to be mostly stationary with minimal movement. You will also be having to look up in the air quite frequently for the dropping sharks from the sky.

Again, the game will be coming out some time this year with no confirmed date. Make sure to stay tuned for updates.