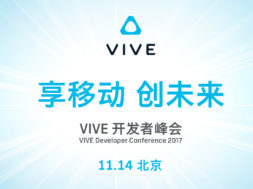 As we’ve previously mentioned, HTC is about to announce some big news today from the annual Vive Developer Conference taking place in Beijing, China. We’ll be hearing from many HTC Vive executive members on how they plan to move VR forward with the introduction of new hardware and software.

The most important update will heavily rely on their upcoming standalone VR headset which is rumored to be called the Vive M. This standalone headset is co-branded with Google to deliver a seamless untethered VR experience.

The first person talking on stage at the Vive Developer Conference will be Wang Congqing who is Vive China President. He will kick off the keynote and give a high-level speech and overview of the current ecosystem. Next on stage will be Bao Yongzhe who is the Vive Virtual Reality, Vice President of New Technology Sector that will most likely be introducing the headset.

Right after Bao Yongzhe will be Qualcomm’s Senior Director of Product Management who will most likely talk about their latest chip integration into the standalone VR headset. According to sources, the upcoming standalone headset will feature the Qualcomm Snapdragon 835 chip with inside out positional tracking.

This is all going down tonight, November 13th at 5PM PST so make sure to stay tuned for important updates. You can watch the stream with us here.