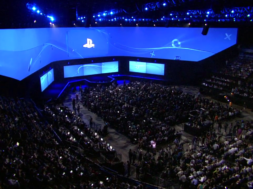 E3 has just announced that they’ll be teaming up with Geoff Keighley, the creator of ‘The Game Awards,’ in introducing a new spotlight event called E3 COLISEUM. This will be the main stage at the gaming conference that brings video game fans a little closer to their favorite games and creators.

Many well known video game developers will take E3 attendees behind the scenes of E3’s biggest news announcements, and special guests will celebrate video games’ role in influencing their work and popular culture. Programming will include appearances by visionary game creators as well as celebrated talent from the film, TV, music, and other entertainment industries.

Some of the publishers that are scheduled to host panels include Activision, Bethesda Softworks, Gearbox Publishing, Sony, Square Enix, Ubisoft, Warner Bros. Interactive Entertainment, and Xbox. E3 stated that more will be announced in the coming weeks.

“The E3 COLISEUM adds rocket fuel to E3’s position as the pre-eminent global event for the video game industry,” said Michael D. Gallagher, president and CEO, Entertainment Software Association, the trade association that represents the US video game industry and owns and produces E3. “We are incredibly proud to give the most exciting voices in video games a unique opportunity to connect directly with fans and create a platform celebrating the role video games have in shaping popular culture.”

“It’s an honor to partner with the video game industry and ESA to add this exciting new element to the E3 consumer experience,” said Geoff Keighley, producer, E3 COLISEUM. “We are working around the clock to produce programming that will give fans unprecedented access to the biggest games and news from E3 and celebrate this industry’s importance to entertainment culture.”

E3 has teamed up with Facebook in covering this spotlight event where the global video game community will have a chance to ask questions to the panelists. Fans around the world can visit the E3 page on Facebook during E3 to watch select panels on Facebook Live, and submit questions to be answered by participating panelists and game teams.