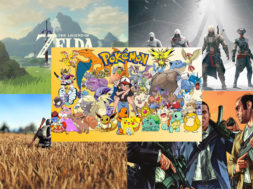 In 2017, we’ve seen a lot of AAA titles come to VR. In 2018, we’ll be seeing even more. But there are a handful of games that would be amazing to see ported over to VR as well. Let’s break down some of those games and titles.

Games that would be amazing in VR

A game that instinctively comes to mind is GTA V. How cool would it be to walk around the streets of Los Santos in VR where you get to go on wild chases, hit some people over the head, or get in a gun fight with the police. There are so many mods available in the game that it would be almost infinite in how many hours you can put into this game in VR.

It would also be so cool to just hang out in this virtual world with your friends and doing things that you wouldn’t be able to do in the real world. I almost imagine it to be a mix between VRChat and Payday 2 VR where the possibilities are infinite.

There are currently mods out there that allow you to play the game in VR but it isn’t an official release by Rockstar Games. They did however publish their first VR game last month with LA Noire: The VR Case Files and that turned out to be quite enjoyable.

PUBG is one of the most popular games right now and it’d be amazing to see an official release of the game in VR. There are currently many games available that mimic PUBG such as Stand Out VR: Battle Royale or Battle for the Last Chicken but they aren’t the real deal.

Seeing this massive MMO shooter game come to VR would just make things that much more intense because you wouldn’t be scrolling a mouse but rather use motion sensor conrollers to wield and shoot your weapons. Above, you can see the famous Twitch streamer Shroud play Stand Out VR which showcases the possibilities.

Well, the video above shows you an example of what it would feel like to climb a structure that’s really tall. Also taking the leap of faith off of great monuments in VR would be an amazing experience as well.

Super Mario is another classic game that would just be super amazing to play in VR. In the video above, you can see Nathie experiencing the demo where you walk on the brick road and jump across Goombas and collect coins.

Also going down the pipes would be super amazing as well which take you down into the dungeons. We look forward the day where Nintendo releases an official VR experience around the Super Mario franchise.

How cool would it be to train your Pokemon in the virtual world where you battle other trainers and gain experience like the original RPG games. In the video above, you can certainly see the possibilities. Being able to experience these Pokemon use their special attacks and abilities in VR would definitely make you more immersed in the game and feel closer to your Pokemon that you are training.

Also, being able to catch Pokemon in the wild would be another amazing feature. We already saw a Pokemon AR game so why not a Pokemon VR game?

Zelda: Breath of the Wild VR

Zelda: Breath of the Wild was one of the highest rated games in all of 2017. This was the first Zelda game released on the new Nintendo Switch console and definitely takes the cake as one of the best RPGs of 2017. The story is vivid and imaginative and being able to play it in VR would just be amazing.

Nintendo has been pretty shy about developing official VR content but we hope that mentality changes and they port over this amazing RPG game into VR.

What other games would you like to see in VR? Let us know your thoughts about seeing these games in virtual reality.