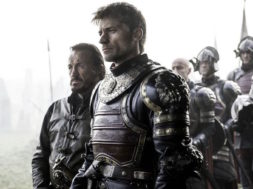 Google has recently teamed up with the ‘Game of Thrones’ star Nikolaj Coster-Waldau to capture Greenland in its current state. Using Google’s 360 street view technology, Nikolaj was able to document the earthly place from his own point of view.

The project between Nikolaj and Google started with the star becoming a newly appointed U.N. Goodwill Ambassador. His goal for the project was to raise awareness and issues regarding climate change and how it’s affecting natural environments.

“Year after year we’ve seen record high temperatures across our planet due to global warming,” said Nikolaj. “Greenland, which I consider my family’s second home, is changing faster than anywhere else on Earth. Here the effects of climate change are easy to see: as sea ice melts and glaciers crumble, places once covered in ice are now bare land.”

Above, Google provides a timelapse of a zoomable area in Greenland from 1984 to 2016. “I hope seeing these images will help people understand the drastic changes taking place in Greenland, and inspire you to fall in love with it the way I have. Unless we change these climate trends, the next time we bring the trekker to Greenland the landscape may be unrecognizable from what you see today,” said Nikolaj.

On his first stop through Greenland with Google Street view, he visited the town of Igaliku, which has a population of 27. In the street view, you can see the beautiful landscape around you with mountain ranges afar, a calm lake in the distance, and colorful shaded houses that can be taken straight out of children’s book. To the left, you can see the famous actor carrying around the 360 street view camera rig.

And while the landscape looks remarkable, Nikolaj notes that many things have changed in the local neighborhood. “As the landscape has changed, so too has the local economy. Alongside new opportunities to mine precious metals that were previously inaccessible, the changing patterns of freezing and melting glaciers have dramatically disrupted the fishing and hunting lifestyles that have sustained the local Inuit population for centuries.”

During his trip, he also visits places such as Uunartoq, a remote island in Greenland which houses geothermal springs. He states that this is one of his favorite places to visit.

His journey with Google ends at the majestic glacial-covered Qoorog Fjord, which is the home to the second largest ice sheet in the world. With recent climate fluctuations however, the ice sheet is pouring 300 billion tons of ice into the ocean.

In Nikolaj’s final statement, he re-iterates the importance of taking care of our planet by banding together. “We have a responsibility to protect this beautiful planet we live on, and I’m starting at my own front door. But everywhere and everyone is vulnerable to the effects of our warming planet. Let’s band together and do something about it—learn about global efforts to combat climate change and discover ways to take action.”